Blackberries and Cobbler and.... art?

It took me 30 minutes to collect 4 cups of blackberries. The old pasture was full of heavily laden bushes and the previous year I had vowed to cut trails among and around them in order to access the lush fruit.

Paths around blackberry bushes? For those of us old enough to remember Song of the South and Brer Rabbit, there is an apt line in the story where Brer Rabbit pleads with the bear "Please don't throw me in the brier patch! Please don't throw me in the brier patch!....." and the bear does, not knowing that it's the rabbit's safe hideaway.  I can tell you that IF you were able to get into these bushes, you would never get out...they were the thorns from hell and I picked them with gloves on!  I seem to have two varieties. One is now almost through producing. The other, the one with killer thorns and huge berries is in the midst of producing.


So why go to all the trouble to pick berries such as these, over and over when they are obviously a lot of trouble?

For the TASTE! How can it not be inspirational to head out on an early morning, before the summer heat sets in and, followed by happy dogs (who also like the berries!) spend a quiet hour communing with nature? I mean after all, plucking nature's free harvest is....liberating!
But it was not just for the immediate gratification of eating the blackberries-it was for the later treat: Blackberry cobbler!

Now I confess that the image below is not mine but the cobbler is identical in looks and OH SO EASY!' What my mother used to make!

Lightly grease bottom and sides of an 8 x 8 pan/baking dish
Add 4 cups blackberries, sprinkle with lemon juice (1 Tbs)
In an medium bowl, mix sugar, regular flour and one egg until mixture forms a crumbly mix. Scatter over blackberries. Dribble melted butter over flour/sugar mixture. Bake 35 minutes until brown and bubbly. Let stand 10 minutes before serving! Sure you can add ice cream or whipped cream and it is good hot or cold!
And what does any of this have to do with art? Let's just say that cooking is an art so I have, in onefell swoop, captured ALL the sensory elements of art :-)
Posted by M Theresa Brown at 7:41 PM No comments:

Imagination is both a necessary and yet freeing component of art.  Although I may predominantly be a portrait artist,  I love to PLAY in the arts.  One of the keys is to shed some of those rules, attitudes and inhibitions ingrained into art students at a university :-) Once that happens, imagination is freed and all sorts of wonderful things happen.

So below is one result of thinking differently...yes, this was purchased as a 2013  Debutante Stool by a horsey young lady and her mom...I simply added her initials and date at the bottom. Another stool, painted in  a black base with white abstracts also went home with a new owner but not at a Deb stool! 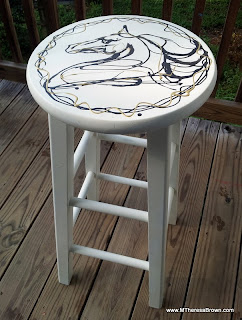 I can go from simple abstract to stunning, actual goldleaf! 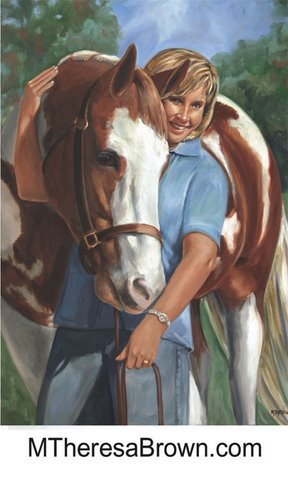